You've certainly heard of Hollywood. You've probably heard of Bollywood. But have you heard of Nollywood? Nigeria's home-grown film industry is the world’s second-largest in terms of the number of hours of film released each year. The BBC recently estimated the annual value of Nollywood at $5 Billion. And like Nigeria, Africa's largest economy, Nollywood is growing at an impressive rate. Now, NollyLand Direct Ltd, a start-up based in the US and Nigeria, has launched NollyLand - a new Video Streaming Platform that is taking Nollywood and other African film industries to a global audience. 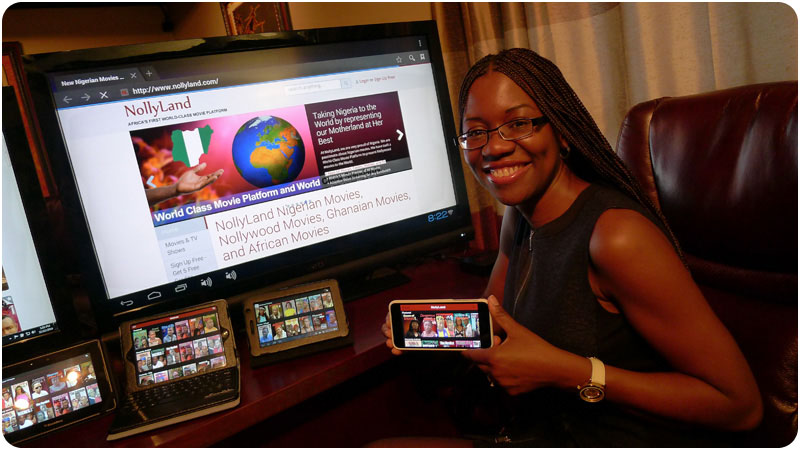 "African Movies are not cat videos – something that you watch free on YouTube, and where the quality of the viewing experience doesn’t matter. NollyLand is more than a website, it is a comprehensive movie platform that provides the quality, world-class features, and Apps that the world's second largest film industry deserves." says Dr. Ngozi Uti, NollyLand's Founder, CEO, and resident tech goddess. Dr. Uti completed her PhD in Computer Science and Engineering at the University of Cincinnati, USA. She is an NSF (National Science Foundation) and Ford Foundation Fellow whose research on Mobile Video Streaming is internationally recognized.

NollyLand provides adaptive video streaming to the viewer wherever they are – on the go or in their living room using low or high bandwidth, 3G, 4G, LTE, Broadband, VSAT, Fiber, etc. NollyLand's team has built a total platform that provides the very best features for watching Nigerian movies on all major devices, automatic bookmarking (to stop and resume watching at the same point later, even on another device), free five minute previews, personalized watch lists, time-line thumbnails, advanced search features, and more. And it does it with no ads, unlike the vast majority of its competitors. NollyLand has also released free Apps for iPhone, iPad, Android, Google TV, Blackberry, Roku, and supports Airplay for Apple TV. "We call it 'African TechKnowHow'" says Dr. Uti. "NollyLand is proud to show that we don't need somebody else to build infrastructure for us. We did it. Africans did it. We have shown that Nollywood is also about African technology and innovation. NollyLand is proud to present African movies to a global audience via our World Class Platform and Apps. NollyLand’s movie platform is as good as, or even better, than anything in the world."

NollyLand is Africa's first World-Class movie platform. There are websites that embed African movies using third-party video processing services and crowd them with advertisements. NollyLand built a world-class platform that is tailored to showcase Nigerian and African movies. As African professionals, we at NollyLand know that Africa is booming, and there is a growing market of millions of African movie lovers on the continent and around the world who know quality and can afford a world-class movie platform. It's reflected in our slogan, "World Class Features - Luxury You Can Afford." "The response has been fabulous," says Dr. Uti. "Our Apps are being downloaded like hotcakes!"

NollyLand Direct Ltd was registered in the US and Nigeria in 2011. NollyLand went live in 2014.